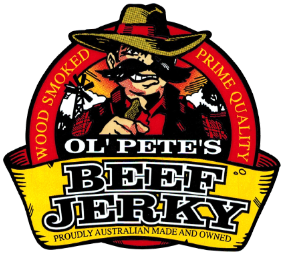 Peter Collins , founder of Ol’ Pete’s (yes the man himself), and lover of great Jerky Found that the Jerky products available on the market weren’t quite what a “good” Jerky should be…some not even close to what a “real” Jerky is.

Deciding to make his own Jerky, and through constant experimentation (including many failures), Ol’ Pete finally developed a Jerky that suited his Tastes…not too dry and full of flavor that lasted right through to the end! Ol ‘Pete had found the secret to the perfect Jerky.

Not unlike a celebrated wine or cheese-maker, Ol’ Pete’s reputation for excellence in his craft and love for his product spread throughout the industry with great anticipation of each new release of his Jerky range.

Ol’ Pete’s “Original” Recipe Jerky, his first Jerky venture, was applauded throughout the world. Quite simply, it delivered a superb texture and exquisite flavor the Jerky lovers had longed for. History will show that Ol’ Pete’s Original Beef Jerky was just “the tip of the ice-berg”!

Where from here??? Don’t worry Ol’ Pete was just warming up…

Demand for Ol’ Pete’s Jerky exceeded all expectations: A true indication of what Pete had stumbled across! The market (and Jerky lovers around the world) waited with great anticipation of what would come next from the kitchens of Ol’ Pete’s. Ol’ Pete’s Chilli Beef Jerky gave Jerky lover’s the best of both worlds, an exemplary combination of the perfect texture that the “Original” had became famous for, coupled with the exciting and stimulating zang of chilli.

Ol’ Pete had literally created a monster… the most superb Jerky the world had ever known!!!

But Ol’ Pete was just getting started… his best was yet to come!

A market that had been “spoilt” by Ol’ Pete’s first two Jerky products demanded more!

The search was on for a new variety of jerky of the “Ol’ Pete’s” standard. Jerky lover’s were demanding a jerky with the quality of Ol’ Pete’s Original Recipe, but with just a “touch” less zing than Ol’ Pete’s Chilli variety. Something adults and kids alike would enjoy.

Ol’ Pete’s BBQ Beef Jerky was the answer. A gentle sweet flour without the “jerky punch”…another great success from the kitchens of Ol’ Pete!!!

Forever in search or ways to promote Beef Jerky, Ol’ Pete continued in his quest to deliver to the market jerky of unprecedented quality and flavour.

From Ol’ Pete’s initial vision to produce the best beef jerky anyone had ever tasted, from the “Originl” to the “Chilli” and the “BBQ”, Ol ‘Pete released his now famous Bacon flavoured jerky. The reception from the world throughout was exceptional!

What was it that made Ol’ Pete’s Bacon Jerky so great…?

Developing a bacon flavoured jerky couldn’t be that difficult could it? No! But to develop one that maintained the Ol’ Pete’s standards doesn’t happen over-night.

Ol’ Pete put three hard years into perfecting his new Bacon Beef Jerky before releasing it into the market. The recipe tested over-and-over. The result??? A taste sensation, packed with the unique flavour of bacon…but the secret here is… the taste comes purely from beef… that’s right…no pork or pork derived ingredients! Like all all of Ol’ Pete’s products, the ingredients are 100% natural, FREE of artificial colours and flavours…and of course are preservative free!

Ol’ Pete;s big secret to the worlds best jerky is “quality”! Yes, it’s as simple as that.

During the smoking process, different woods are used to give each of Ol’ Pete’s Jerky varieties their own unique flavour. The down-fall of many jerky manufacturers is their willingness to use “any” type of wood, as long as it burns. Some even use “liquid Smoke” which is a  geretic form of liquid wood flavouring.

Ol’ Pete experiments with many woods to best determine their natural characteristics. The results are obvious…no big secrets here…

In short, Ol’ Pete’s went in search of the perfect beef jerky, and found it!

A jerky with, a palatable texture and exciting flavour. A product suitable for everyone…free of artificial flavours and colours…and preservatives. 100% natural, exactly what a great jerky is and should be.

Ol’ Pete’s range of Beef Jerky is Maintaining the historical importance of jerky. Ol ‘Pete has simply “re-invented the wheel”…producing jerky the way jerky was meant to be.

Jerky will live on. History dictates that. Ol ‘Pete will play a minor role on jerky history, but make no mistake, the role of this man will be integral to how jerky is perceived in generations to come.

Ol’ Pete’s great range of Beef Jerky’s has re-introduced so many people to this great product, that’s it’s survival and popularity is guaranteed.

Who would have thought all those centuries ago, when jerky was being smoked over the open flames of a “campfire”, that one man would have so much influence on where jerky is today…and where it’s headed…!